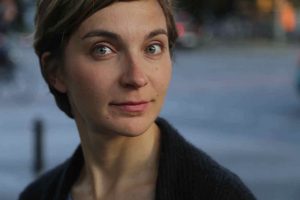 I am a choreographer, dancer, urbanist and design thinker specializing in spaces for artistic and social innovation. I work at the meeting point of choreography, urban research and participatory processes. I have an MA in historical Urban Studies (TU Berlin), a BA in Contemporary Dance and Art Management (DMU Leicester, London Contemporary Dance School) and I am a qualified Design Thinker (HPI Potsdam). 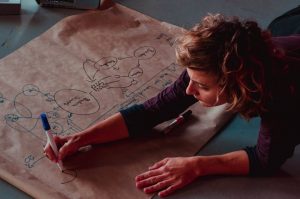 I’ve been teaching dance improvisation and composition workshops and classes for nearly 20 years across Europe, South America and the Middle East. I have worked as a mentor for young people and dance students in Universities and training institutions the UK and Germany. I have led Design Thinking-based workshops and labs in Germany, the United Kingdom and Brazil, moderated public consultation on urban planning processes, and worked as a business coach for presentation skills. From 2009 – 2018 I was freelance programmer and curator of the international, intergenerational workshop program of Tanzfabrik Berlin.

I have worked as a dance artist in various collaborative processes since 2003 and as solo artist/choreographer since 2008. My first solo Inventory/(Räumung) premiered at nottdance08 Festival in October 2008. In 2009 “Inventory” and a lecture performance on cities and spaces connected to the solo material was shown in Berlin (Tanztage), Santiago de Chile (Movimiento6 Festival), Utrecht (Europe in Motion @ Springdance) and London (The Place – springloaded). The group piece “tourist” premiered at Uferstudios Berlin in 2010. It was co-commissioned by the South Bank Centre London and nominated for the prix jardin d’Europe 2010 at idans festival Istanbul.

As part of the Tanzplan Deutschland artist-in-residence scheme at fabrik Potsdam in Germany I developed the interactive dance piece Relay with choreographer Donatella Cabras and media artists Barret Hodgson of Vent Media. The site-specific piece was also reworked for Greenwich Dance Agency in 2008 and for the Goodenough College near Kings Cross London in 2010. Between 2009 – 2018 I conceived, hosted and performed twelve “Susi & Gabis Salon” improvisation evenings with international guests in the UK and Germany in collaboration with Susanne Martin.

My latest work for the stage “The Amplitude”, a collaboration with sound designer Mattef Kuhlmey premiered in October 2016 and has been touring in the UK, Germany and Chile. In collaboration with Mattef Kuhlmey I have also been commissioned to create three urban social history sound walks and sound installations for dance venues and a gallery: “Hidden Spaces” for Dance 4 in Nottingham (2014), “Hidden Traces” for The Place in London (2017) and “Zeitwanderung” for Tanzfabrik Berlin’s 40 Anniversary (2018). 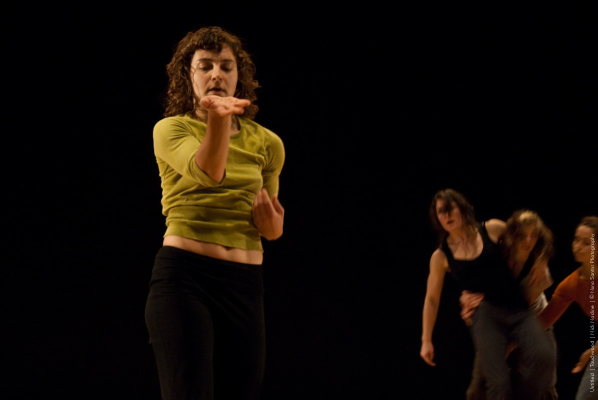 As a dancer, I have performed for choreographers Rick Nodine, Sioned Huws, Christoph Winkler, Fabrik Potsdam Company and others. I am also a regular performer and facilitator in improvisation events in London and Berlin. Her performing, teaching and choreographic work is based on a continuous interest in improvisation, influenced by teachers such as Rick Nodine, Julyen Hamilton, Scott Wells, Andrew Morrish, Rosalind Crisp and Dieter Heitkamp.

“Showing an honest and thoughtful approach to her work, Reuter manages to draw in even the most diverse range of audience members. A must see artist with an original and thought-provoking approach to choreography.”
Fiona Jackson – Arts Award Magazine

“Reuter is a charismatic performer with considerable charm and a real knack for communicating with an audience.”
Martin del Amo – Realtimearts Australia

“Gabriele is a magician of understated virtuosity”
Sue MacLennan – Choreographer